You are using an out of date browser. It may not display this or other websites correctly.
You should upgrade or use an alternative browser.

We've shared a lot with the community about the cool things coming up for our legal factions (vehicles, uniforms, etc) but we want to pay just as much attention to the illegal RPers out there. Faction management has put together a few ideas but wanted to open the discussion to the community to see what you want.

What features/systems will make the illegal RP experience on LSC unique and enjoyable for you as an illegal roleplayer?

How can we tweak our faction system to support illegal factions? What would benefit you?

No idea is off the table, share your grandest wishes. Maybe our awesome development team will implement it for us

Allow factions to have exterior mapping for their environments along with businesses not player owned to support a realistic neighborhood.

Drugs being broken down to smaller amounts such as 0.01g rather than "You've used 1g Marijuana" allowing for dealers and users to realistically distribute or use drugs in different increments.

Player created drugs that need to be harvested or made by mixing specific chemicals rather than just buying an already created drug from the script. Each drug scriptwise requiring specific ingredients and combinations resulting in different potencies.

Easily accessible melee weapons that don't have an extreme price tag. Realistically anyone can buy a knife, brass knuckles, bats, tools, etc GTAV has from just Amazon or Wish.

Give unofficial factions the ability to have their own faction chat and membership invites to help keep illegal factions organized. Due to this being an OOC system it'd benefit all forms of role-playing with a hierarchy. This should be applied for and if any rules are broken, the server logs would be able to prove any metagaming or abuse.

Official factions should have benefits that would help fuel the server in character such as but not limited to one; drug labs, chop shops, firearm facility, etc.
Last edited: Feb 9, 2021

A few things I think would make my experience go well I think 1 having a nice non-toxic community would be nice meaning people are mature and able to take losses. Another I think would be cool but It might be a far reach, however, I'm still gone note It because I think it can be a big benefit to both sides but mainly gangs and illegal roleplay In general. I think NPC's should be added to the server for a few reasons.

2. NPC's/Civillans = Drug dealers a lot of the time have a lot of drugs In stock that they can't sell because a lot of people are not buying or not interested in that certain drug. I think if NPC's are on the server gang members should be able to sell to them. Not only that what If an NPC sees you selling drugs to people and they call the cops It gives the police a reason to chase/search you that's realistic it brings realism to the server. I also want to point out that NPC can be a reason that gangs can have an actual turf war due to some spots having multiple crack heads being in one spot that the other that makes it interesting not only that it can help develop their characters as well. I think we should be able to rob NPC's for little cash aswell.

"Gang wars" shouldn't just turn into the wild wild west where anyone and everyone involved just start blasting people on the other side. I understand people want to make statements and gun violence is a real thing but from past experiences, it gets annoying and boring real fast when the rival gang is just rolling around in a vehicle waiting for you to appear at your "spot" just to start blasting you. 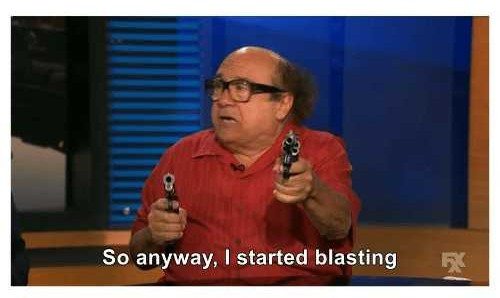 As stated by Euphoria melee weapons should be regularly available at local stores or pawn shops. Adding to another of their points, In the UK you can buy everything you need to grow weed completely legally from shops except the actual weed itself, and from my time watching breaking bad I know/(think?) you can get everything you need to start making crystal meth in the US. What I'm trying to say is that you shouldn't need to go to some NPC "Cartel" gang or whatever to score drugs so a crafting system would be great.

As LS is LA is implementing the legalization of weed gonna be a thing on the server?

However, hardcore drugs on past servers to me serve little to no purpose besides, get drugs > try and sell drugs > stuck with drugs > repeat.
A way to offload drugs would be nice and I get Goon's input about NPC's but I dislike them being on the server at the same time but that's just my opinion.

And finally, I hope the server just doesn't turn into Cops and Robbers!

EDIT: The illegal gun market, what are the staff/server ideas for this? I feel like certain guns shouldn't be available from the GTA V selection for obvious reasons.

Introduce a lot of guns to the server, at low prices, and set price limits on gun sales. This will prevent gun prices from skyrocketing.
Also, allow gun license holders to buy, hoard and re-sell guns to other people.

1. The upmost essential step of illegal roleplay pertaining around drugs; Provide a system in a way that not everyone has access to. Limited accessibility. Therefore it creates a demand and supply, a want. If faction A has the same thing as faction B and C-Z, there will be nothing to interact in a positive manner also. Everyone would just be open to beef instead of working together to create a market within a market.
2. NPC’s to buy drugs. When and if it comes to a time where no one wants to buy as far as player wise, allow NPC’s to buy drugs. Maybe at a lower cost etc.
3. Make the drug more than just a drug. Allow players to grow and make the drugs ( use items baking soda. That coming with strength wise of the drug, different creations of strands etc.
4. Less limitation on drug prices. Allow players to interact with each other to find where the lowest price is. Now there should be a invisible line as to where people shouldn’t be heavily taxing on drugs. Allow that to be IC for the most part with a initial standard. Allow people to find where the lowest price is, creates more interaction and separation and diversity.
5. Safes for money. Allow money to be a item you can place instead of having to put money in the bank, which illegal doings wouldn’t fly going into a bank.
You must log in or register to reply here.
Share:
Share Link
Menu
Log in
Register
Install the app
Top